Dear my beloved yeast breads,
I must offer my sincerest apologies that your first appearance on Hot Oven, Warm Heart is devastatingly belated. I simply cannot believe that you have not yet been featured in all your glory- but you have not been forgotten, and can no longer be ignored. Let me assure you, however, you are now, and always will be my very favorite baked good to create in the kitchen. The feel of your soft, supple dough giving way as my hands lovingly knead you into submission, the smell of fermentation wafting through the air, the sight of your magic in action as you climb up the sides of my Grandma’s big yellow bowl, reaching the top and peaking over to say “hello Joy, I’m ready, let’s go!”- these are just a few of the reasons I am captivated by your enchanting disposition. Ever since that first loaf of cinnamon raisin swirl bread, I knew you were special and would forever hold a place in my heart, along with top honors in my baking repertoire. Please forgive me for my indiscretion, and allow me to introduce you in one of your most irresistible forms, the sticky bun.
Love,
Joy 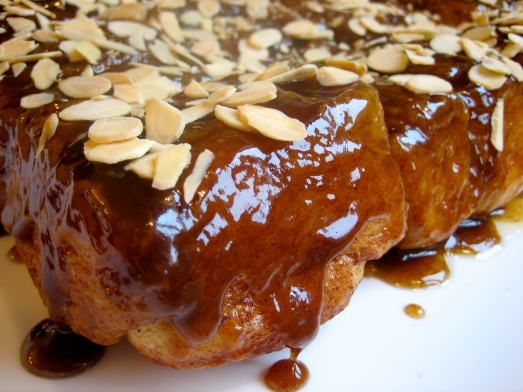 The origin of the sticky sweet, large-size caramelized cinnamon roll popularized in North America and aptly called the sticky bun, was clearly influenced by British, Dutch, and Germanic cookery and baking. Before the sticky bun came two central predecessors, the Brit’s Chelsea bun and the German’s Schnecken. First created in an eighteenth century Bun House in Chelsea, Great Britain, the Chelsea bun is made of a rich yeast dough flavored with citrus zest and cinnamon or a spice mixture. The dough is spread with brown sugar, butter, and currants, rolled into a spiral shape, sliced into individual buns, given a sweet glaze covering, and baked. On the other hand, Schnecken, which means “snail” in German, are also yeast-raised sweet rolls, whose dough is spread with sugar, nuts, spices, and raisins, rolled, sliced, and baked in muffin tins with either honey or sugar and butter in the bottom, creating a glaze. The appearance of Schnecken in America can be traced back as early as the 1680’s, when they became popular among bakers in Germantown, Pennsylvania, a Philadelphia suburb. As more German immigrants settled in Pennsylvania Dutch Country in the 18th Century, Schnecken became a signature pastry of the area, which it remains today. The sticky bun combines the size and make-up of the Chelsea bun with the fillings and coatings of Schnecken, taking the best elements of both pastries and transforming them into a truly irresistible treat, steeped in cultural history.

As one of my favorite yeast breads to make, sticky buns make a regular appearance in my kitchen. Though the multi-step process sometimes seems daunting and time consuming, they are a great do-ahead recipe, and a fantastic crowd-pleasing sweet that you can assemble the day before serving. Just recently, I baked a batch to serve with morning coffee when entertaining one of my closest friends (who shall remain nameless)- by the end of our get-together, she managed to devour three, and I realized that a tray of hot, fresh buns just out of the oven and still oozing cinnamon-y goodness was potentially dangerous to leave in the center of the table! A great sticky bun can be a real show-stopper- if they’re too yummy to stop at one, then I know I have a winner on my hands.

Coincidentally, not two days after breaking out my go-to recipe, I checked the SMS site only to find that my next assignment, as chosen by Jen of Not Microwave Safe, was Melissa Murphy’s Sticky Buns with Toasted Almonds. At first glance, I considered passing, but then I recognized the opportunity I had on my hands. What a perfect chance for a sticky bun throwdown! By tasting the two recipes side-by-side, it would be much easier to discern the subtle nuances differentiating the buns, and hopefully, with the help of my tasting panel (a.k.a family), I could select the preeminent favorite. Would the new bun on the block surpass my old standby in taste, texture, appearance, and originality? I simply had to find out. Needless to say I’ve had quite a few buns in my oven this past week, but after much kneading, proofing, punching, rolling, sprinkling, slicing, baking, and glazing, I’m happy to report a winner has been determined. Before I announce the award for my #1 bun, let’s take a closer look at the competitors.

In this corner, Melissa Murphy’s Sticky Buns with Toasted Almonds.

In fairness to the competition, I decided to follow the recipe to the letter, making no changes or substitutions. While the dough itself came together quickly and was easy to handle, I felt it was a little stingy for a batch of twelve buns. By the time it was rolled out to the size rectangle indicated in the directions, it was quite thin, and I almost had problems with tearing and leaking (luckily I solved the issue with some crafty bun cutting). But it was the filling itself that I found flawed. Divergent from the melted butter/brown sugar combination that I’m used to, Melissa’s recipe calls for an egg wash and granulated sugar. After applying the wash, my dough was, well, wet, making it difficult and messy to roll up. I was displeased with the visual appeal of my buns when first shaped and placed in the pan, but I remained hopeful that after they rose, baked, were doused in sticky glaze and covered with lots of toasted almonds, the final product would not reveal the many imperfections. (Thankfully this theory proved accurate). My finished buns were lovely- lofty, delicate, moist, and well coated in a deep, dark, viscous glaze. Most striking, however, was the lack of flavor cohesion. Instead of coming together harmoniously, the ingredients were highly discernable- the strong tastes of orange zest (in the dough) and maple syrup (in the glaze) almost overpowered the bun itself, detracting from the overall eating experience. But truthfully, all criticisms aside, the buns received high praise from all who tasted them, and if there were no competition or comparison, they would certainly be considered a delicious treat, and just plain finger-lickin’ good. 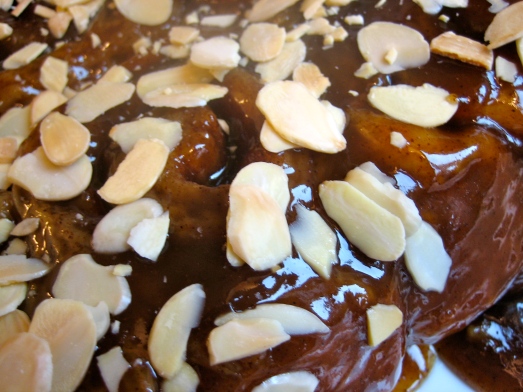 And in this corner, may I present to you the Cook’s Illustrated Overnight Sticky Buns. 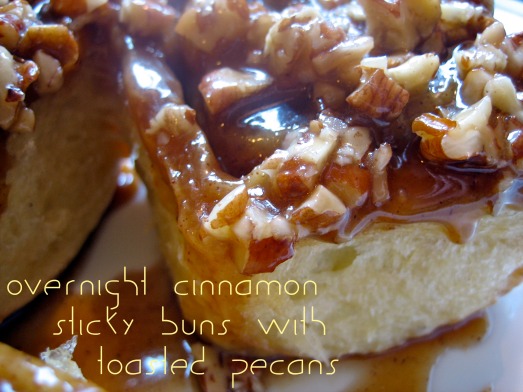 Now I must admit, I may have been a bit biased because this recipe has never failed me- consistently producing some “knock-your-socks-off,” crave-worthy, can’t-leave-the-table-without-eating-three-of-‘em sticky buns.

The dough is more substantial than Melissa’s, and is also much richer with added eggs and butter, imparting tremendous tenderness and a soft, supple texture. It is an absolute dream to handle and roll out, slices beautifully (with the help of a serrated knife and a spray or two of Pam) and rises into perfectly spiraled, nice and neat puffy little clouds of dough.

Though you must wait patiently during the buns’ short stay in the oven, you’re rewarded with the tantalizing and intoxicating aroma of warming spices that permeates the entire home. A dozen buns emerge in less than half an hour, beautifully golden brown and somehow utterly inviting.

The cinnamon brown sugar filling adds great depth of flavor, really driving home the taste of caramel. But what truly sets these special buns apart and makes them unforgettable is the double ooey gooey glaze. Yes, these outstanding buns not only receive the traditional bottom of the pan glazing treatment, they are also topped with yet another glaze that is mixed with the toasted pecans and generously spooned over each individual turned out bun as it cools. I am convinced it is this brilliant double-glazing technique that delivers the ultimate sticky bun experience in each and every bite, and as far as I can tell, no other bun in the land holds a candle to this champion.

So, I’m sure many of you are currently suffering from sticky bun overload (if there is such a thing), but I highly recommend that you bookmark this particular version, and place it in your must-try files, maybe to make an appearance on National Sticky Bun Day- February 21st. Now, I’m confident that I represent the dissenting opinion on Melissa’s buns since they were truly quite tasty, but in the end, they just did not have enough of a “wow factor” to de-thrown my longstanding favorite. They still receive two thumbs up from this bun baker, and I wouldn’t hesitate to give them my seal of approval. 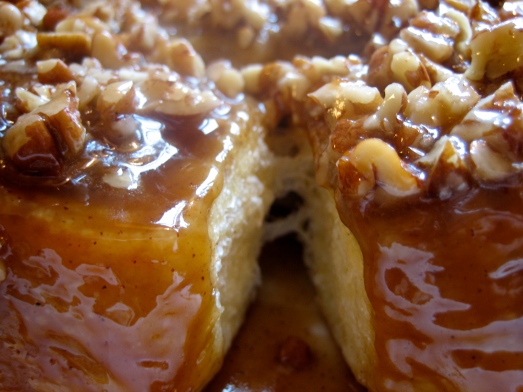 A big thanks goes out to Jen of Not Microwave Safe for her terrific selection, and affording me the opportunity to orchestrate my very own throwdown. It was so much fun baking back-to-back batches of buns, and evaluating the pros and cons of each. I can’t wait to explore the other SMS bakettes’ blogs to check out all the creative ways everyone played with the recipe. I just have to note that although I tried to prepare my buns exactly as directed, I couldn’t help but make a few very minor alterations. Instead of topping my buns with chopped whole almonds, I elected to toast up some sliced almonds, simply for aesthetic appeal. More importantly, in order to avoid dry, hard, over-browned buns, I had to pull mine out of the oven much earlier than the instructed 45 minutes- they were fully baked between 25-30 minutes, so if you decide to give the recipe a go, please start checking early! My other recipe offered a great tip to test the buns for doneness- insert an instant read thermometer into the center of a bun, and if it’s reached 180°, they are finished baking. Finally, instead of removing each bun from the pan individually with tongs (which I feared would squish them), I turned them all out at once by flipping the pan over directly onto my serving platter. Just a few notes that I hope help you along the way!

I encourage you to head into the kitchen to whip up your own batch of sticky buns- you will not be disappointed! And if you’re a nervous yeast bread virgin with any questions or concerns, I’d be happy to offer my assistance- just leave a comment and ask away! 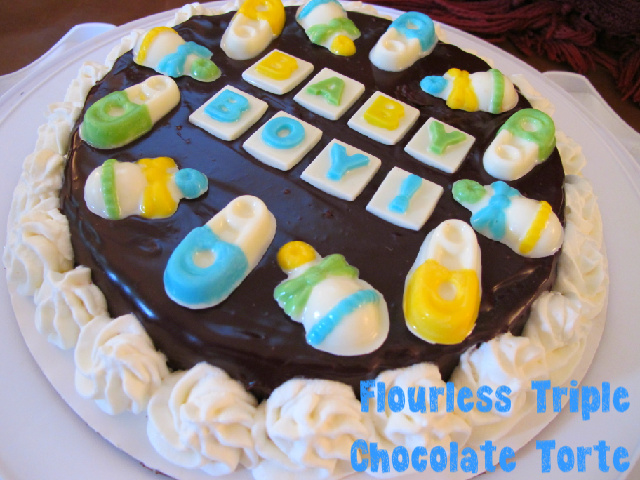 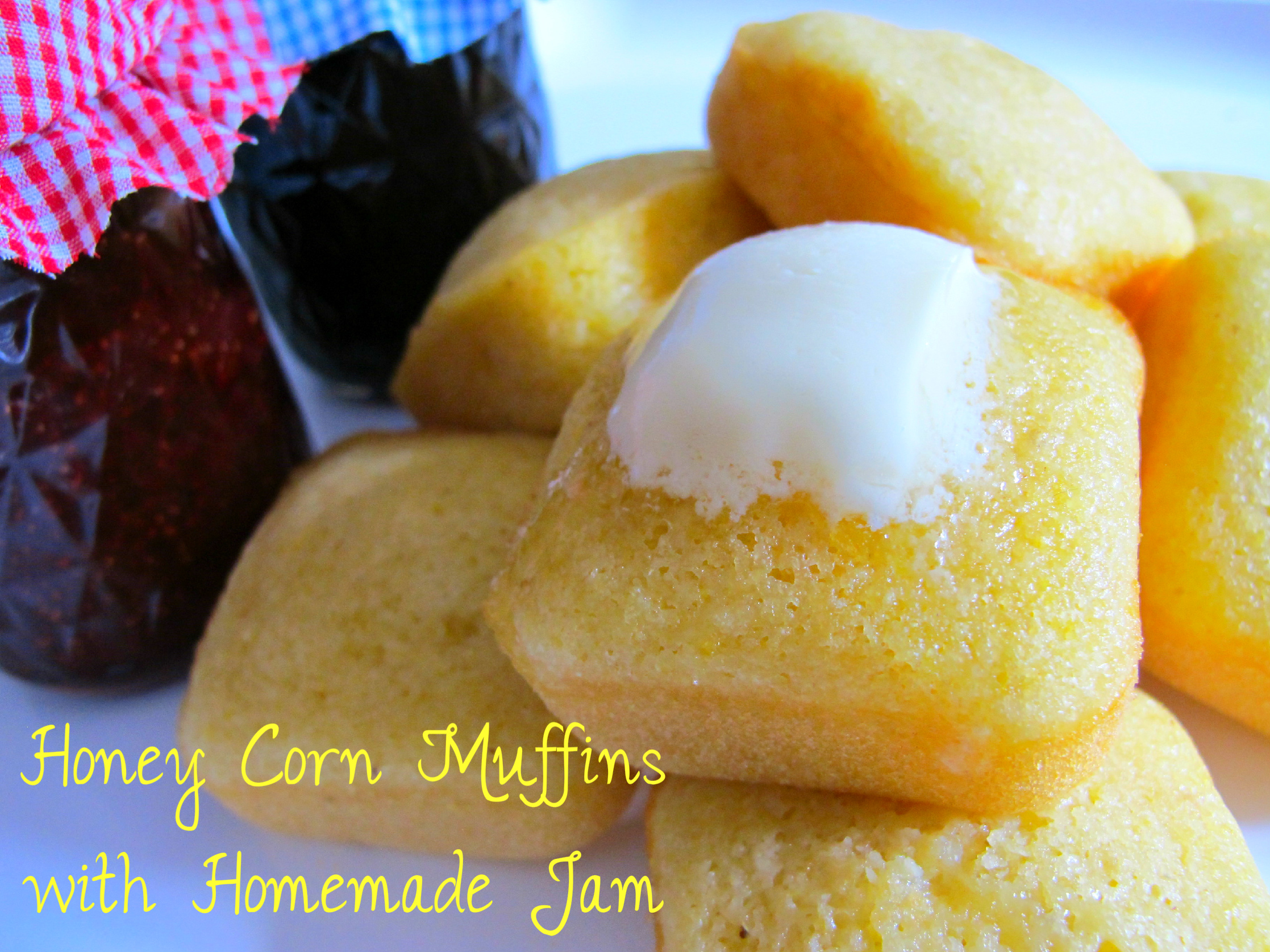 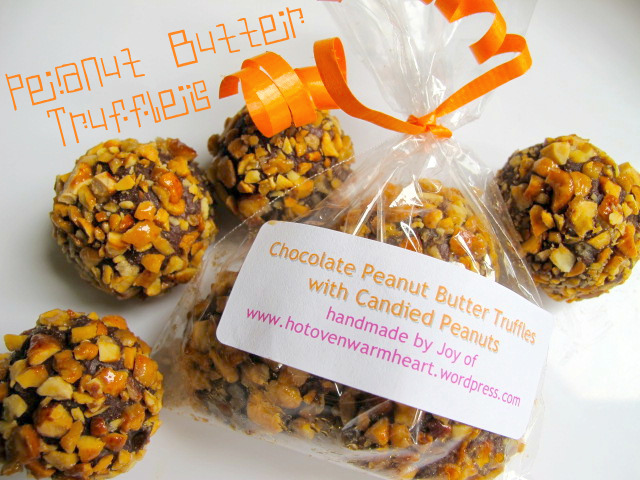 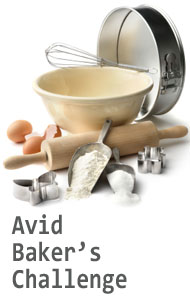 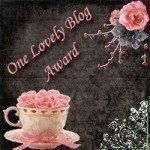 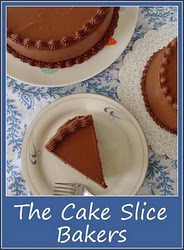 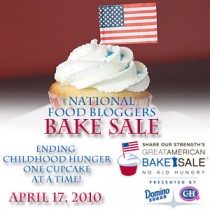